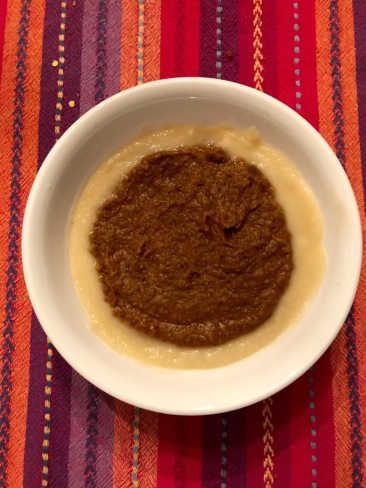 Several weeks ago, this blog post gave you the link to an app that would show what you would see in the Great American Eclipse of 2017–if you were in the United States.

A couple of days ago, this post had suggestions about what to do if you were working (or outside the US) or didn’t have the eclipse glasses necessary to watch the event without damaging your eyes.

So if all that is settled, the only question is:

What food are you going to make to celebrate the Great American Solar Eclipse of 2017?

People who know me know that I take every opportunity to celebrate.  So of course I’m going to celebrate this solar event.  And to me, celebration involves food.  Thus, our dinner tonight was my version of Solar Eclipse Soup.

Earlier in the week, I had make some vegan Creamy Cauliflower Soup (but don’t tell my son, who insists that it is Potato Cauliflower Soup, even though there were no potatoes in it.  His rationale is that he liked it, and he doesn’t like cauliflower that much, so thank goodness I put potatoes in it to make it taste so good).  Then tonight I made some vegan Spicy Curried Lentil Soup.  I put the Cauliflower Soup in first, then layered the Lentil Soup on top in a circle to represent the moon in the center of the sun.  I’m sure Martha Stewart would have made it all look more beautiful, but I was pleased with how it turned out, since it was all just a big experiment.  But actually, the slightly sweet but mostly creamy Cauliflower Soup went really well with the very spicy Lentil Soup (because everyone in my house likes spicy).  And it was just fun to have a meal celebrating tomorrow’s event.

But if your family is not a soup family, you could do the same thing with pancakes.  Make some basic pancake batter, then put a spoon of cocoa-flavored batter in the middle, and I bet it would turn out well.  The key is to have light and dark soups/batters/ingredients that are about the same consistency or density, or else the inner circle won’t keep its shape and one thing will flow into the other.

So there is another experiment you can try if you don’t have solar eclipse glasses.  What light and dark fluids or materials can you mix together without the inner dark circle losing its shape?

I’ve got another Solar Eclipse dish planned for tomorrow night as well, so come back after the eclipse to check that out.  And if you’ve got a special Solar Eclipse recipe, please share it in the comments below.