So here we are–starting our SNAP Challenge Take 2.

This Sunday’s meal looks a lot like our Sunday meal on the first SNAP Challenge.  For lunch, we had another green soup.

However, this is not my squash soup, it is my faux cream of broccoli soup.  I replace the cream with potatoes, which don’t have a very assertive taste but add body and creaminess to replace the milk and/or cream.  I include the peels, which contain most of the nutrients in a potato (plus, I don’t have to peel them), which makes the soup a darker olive-like green instead of the bright green or light green (depending on how much dairy goes into the soup) that many people are used to for cream of broccoli soup.  Still, I’m willing to trade off attractiveness for health in this soup (which mostly I just serve to my family, whom I’m not trying to impress most meals).

This is a vegan recipe, but I did add some sharp cheddar cheese to the bowl to add to the protein level.

For dinner, I grill/roasted a whole chicken on the grill.  So to confess:  I did the same thing the Sunday of my other SNAP Challenge.  I found another all natural chicken on sale for less than one dollar a pound, so it just seemed like to much of a good deal to pass up.

I expect to get three dishes out of this chicken.  Tonight we will just have it roasted, along with….what is in the iron cast skillet next to it on the grill? 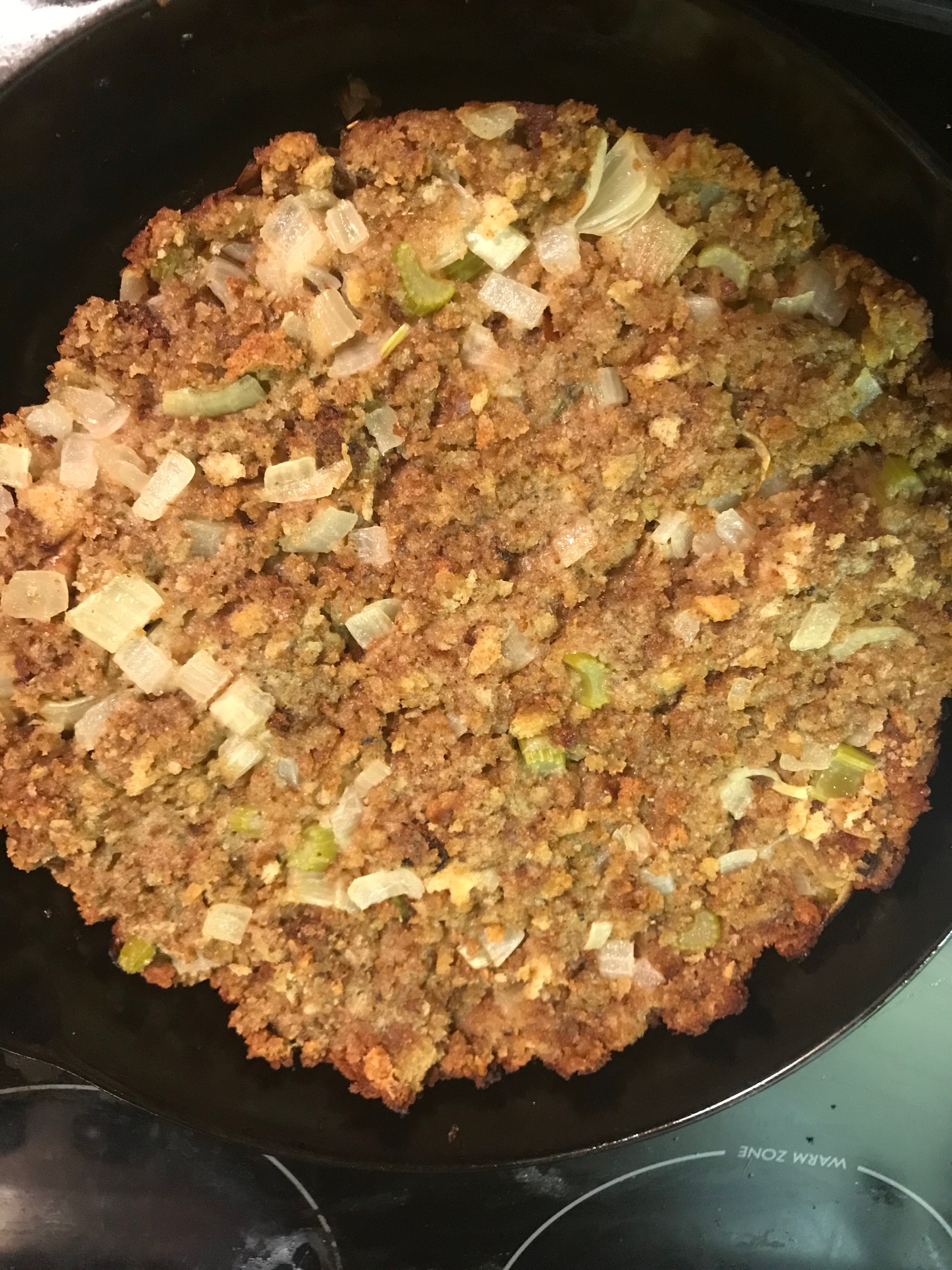 In case you can’t tell–pictures are dark because dinner got started a little late because right before I would have started cooking dinner, my son asked me to take a walk with him, so it seemed like a little delay was worth spending some quality time with him–anyway, that is stuffing!

Stuffing was not my original plan.  I had planned to have corn with the chicken, since in the past two weeks the Farmers Market has been selling wonderful, organic corn for a really low price.  However, the high heat at the beginning of the week apparently fried all the corn ready for picking, so there was none available this weekend.  I went to the grocery story and found a bag of stuffing on deep discount because it was about to expire…I guess baking chicken/turkey with stuffing is not high on people’s list when the temperatures are in the upper 90s.

Now, I didn’t want to heat up my house baking chicken and stuffing either.  I already planned to roast the chicken on the grill.  I found this recipe to cook stuffing on the grill as well, so I thought I would try it.  I already had butter, onions, and celery, and I made chicken stock from the innards of the chicken.  Let’s try it, right?

Actually, it turned out really well.  The sides were crispy from the heat of the skillet, but the rest was hot but moist thanks to the covered top.  I wouldn’t have thought of doing this, but grilled stuffing turns out to be a great new recipe.

We had it with salad and fruit, making it a well-rounded, but heat outside the house meal!