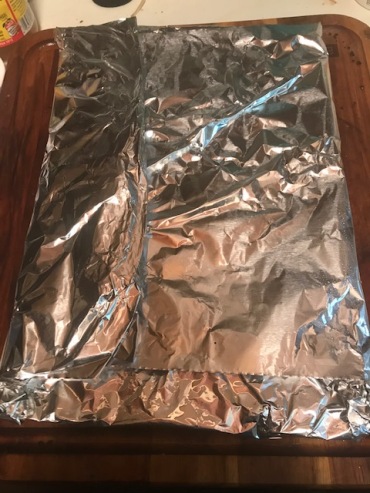 That’s what makes this Temptation Tuesday.

Here is the story:  After I spent almost all my food money for my SNAP week, I found one of our dear friends was going into the hospital for surgery.  After a highly successful procedure that will greatly improve the quality of life, they came home yesterday.  I wanted to do something to support the family (which currently consists of 10 people in the home), so I offered to fix them dinner for tonight.

Obviously, our SNAP Challenge supplies weren’t going to stretch to feed an additional 10 people.  Fortunately, I do have access to additional funds, and since this was a mission of mercy, I decided it would be OK to buy more food to fix for them…AS LONG AS we didn’t eat any of it.

I bought the food yesterday.  I got up early this morning to make the brownies while everyone else was asleep, because it is much harder to resist brownies when you have been smelling them cook for half an hour.  I mixed up the batter, scraped as much as possible into the pan, and then immediately ran water into the mixing bowl so I wouldn’t be able to lick the remnants of the bowl or spoon.

I had also bought ingredients for a salad (in a sealed bag, so that was easy enough to resist), some french bread that needed to be cooked (not going to cook it and so not going to eat it), and some blueberries (looked good, but I left them in their container unopened).  The next big temptation was making the lasagna that was the centerpiece of the meal.

I was going to put it together but let them cook it when they were ready to eat, so obviously I wasn’t going to eat a piece of uncooked lasagna.  But I’m the kind of cook who is usually tasting everything as I go along to make sure there is enough oregano in the sauce and the right proportions of mozzarella and parmesan cheese in the ricotta (actually, I used a total of 6 different cheeses).  So NOT taking a spoonful of sauce here and a taste or two of the cheese mixture there really went against my grain.  Still, I managed to get it made without a single sampling.

One thing that really helped was my decision that as long as I was doing the SNAP Challenge, I could use this opportunity to try a more consistent trial of intermittent fasting.  There are two major categories of intermittent fasting:  one where you have a highly reduced diet for 2 days and a regular healthy diet for the rest of the week (known as 5:2 fasting) and the other when you restrict all food consumption to a set number of hours in the day, usually either 12 hour (12:12 fasting) or 8 hours (16:8 fasting).

I’ve kind of been playing around with 12:12 intermittent fasting, because most days I’m not that hungry in the morning and don’t eat breakfast.  So I don’t eat or drink anything except water past midnight, and delay my first meal until noon.  However, I have a tendency to nibble this or that in the morning, and while dinner is usually over by 8, I often have a snack or a dessert a couple of hours later.

With our SNAP Challenge food, however, there was no money for many snacks or ANY desserts.  The literature was mixed, but it seemed experts thought the 16:8 was really more effective.  Since I didn’t have any snacks or desserts to eat, I figured this was a good time to test out 16:8 fasting.

If you aren’t familiar with intermittent fasting, here is an article that summarizes some of the research.  Basically, digestion takes a lot of body resources (as you have experienced when you get sleepy or sluggish after a big meal).  With a significant time off from digesting, your body has a chance to do genetic and cellular repair and produce some helpful hormones.  Your insulin levels goes down and your blood sugar stabilizes, which can help to burn fat and lose weight.  It is generally associated with lower incidences of lots of diseases you would rather not experience and positive health conditions you would like to encourage.

My commitment to really trying this 16:8 fasting is what helped me survive this Temptation Tuesday.  No sampling along the way, no taste tests, and no licking the bowls.  The right-hand picture shows that I just wrapped the entire batch of brownies into aluminum foil without cutting them into servings, because my will is only so strong….

So no brownies and lasagna for us.  But we still had good meals.  For lunch, we had leftover pizza.  Eating it mindfully, my two slices really filled me up.  For dinner, I made what was described as a lighter tuna casserole–I don’t think I’ve ever made tuna casserole before, but looking just now at some of the recipes online, yeah. this is lighter.  It is organic whole grain pasta, greek yogurt, tuna, frozen peas (one of the best frozen vegetable alternatives), onions, salt and pepper, and that’s about it.  I served it with fresh cherry tomatoes.

Thus I resisted temptation, which allowed me to support a beautiful family during unusual times, and we still had good meals.  It made me realize another difficulty of having so little money for food.  Many of the people with the least are the most generous with what they have.  But it must be difficult when you are trying to support someone else and can’t offer them much except to share your maybe-not-so-exciting meal.  Any food can be a great gift in the circumstances.  I am grateful, though, that I have the resources to go beyond my SNAP Challenge budget to feed others during a situation like this.