We’ve done Meatless Mondays at our house for years.  It is a movement that tries to nudge animal-eaters such as ourselves towards a more plant-based diet.  For most Americans, eating more vegetarian meals is one of the biggest steps towards reducing their carbon footprint.  Plus, properly-balanced vegan or vegetarian meals are also good for our health.  (For more information about the positive environmental and health effects of eating a plant-based diet, see here and here.)

Because meat is relatively expensive, relying on vegetarian meals for a SNAP Challenge diet makes a lot of sense.  However, this picture of then-Newark-mayor, now NJ-Senator-and-Presidential-candidate Cory Booker, is an example of how NOT to do that.  (Note:  Booker did the SNAP Challenge in 2012 when he has a vegetarian.  In 2014, he became a vegan.  He is a strong advocate of reducing our meat consumption, saying that our current level of eating meat is just not environmentally sustainable.)

The issue with Booker’s meal plan is that the bulk of it relies on 17 cans of pre-cooked beans.  Beans are a great choice for an affordable, healthy, and filling vegetarian meal.  But canned beans are the most expensive, least healthy, and in my opinion, least satisfying way to include beans in your diet.  Cooking dried beans is a much better option.

For example, I bought some dried chick peas for a  dish later this week.  At our grocery store, a can of cooked chick peas is $.99 and contains 3.5 1/2 cup servings.  A pound bag of dried chick peas is $1.29, but provides 12 servings when cooked.  That is, an additional $.30 results in between 3 and 4 times as many beans.  Plus, the canned beans usually have a lot of salt and have a mushy consistency.  If you cook them yourself, you can control the salt and the consistency.  As I said in a previous post, I think most people find food with some bite to be more fulfilling than a completely mushy meal.

Of course, the advantage of canned beans is convenience.  But while beans can take a while to cook, it is almost all hands-off time.  This is one example of how we trade off health and taste of food for the time saved by having it prepared for us.

Another choice that may not have been the best was Booker’s 2 apples.  I can relate to this, because apples are one of my son’s favorite snacks.  We usually buy a 5 pound bag of organic apples and he chomps through them all over the course of a week (and often in several days).

However, apples, especially this time of the year, are usually $3-4/pound.  The organic varieties are $1-2 extra per pound.  While I don’t buy everything organic, apples are always on the “Dirty Dozen” list produced by the Environmental Working Group about  grocery produce found to contain the largest amounts of pesticides.  Therefore, apples are something that I feel need to be organic, especially since my son has had some reactions to non-organic apples.

However, a $5+ bag of apples is almost one person’s entire allotment for a day, and that is as a snack.  It’s just too much for our SNAP budget.  This week, my son is replacing his apples with bananas, which cost $.59/pound for conventional, and $.79 pound for organic.  Even a bunch with over 7 bananas for the week is cost effective enough to spring for the organic variety, although EWG rates bananas as 30th on the list of pesticide content in produce, low enough to almost make the EWG “Clean Fifteen” list of the most pesticide-free fruits and vegetables.

To give Booker credit, sweet potatoes or yams are nutritional powerhouses that are easy to cook.  I just don’t like them, so they aren’t on our menu.  I, too, found frozen vegetables more inexpensive than fresh.  In addition, he was buying his food as a single person (rather than our household of 2.5 people) at a time where the daily allotment was around $4 instead of $6.  Plus he was paying New Jersey prices.  I appreciate his attempt to experience what the least fortunate of his constituents need to deal with on an ongoing basis.

Then, to be honest, I didn’t make the healthiest or most earth-friendly vegetarian dinner tonight.

For lunch we had some of the vegetable soup I made on Saturday, along with a carrot this time instead of toast.  Then for dinner, I made 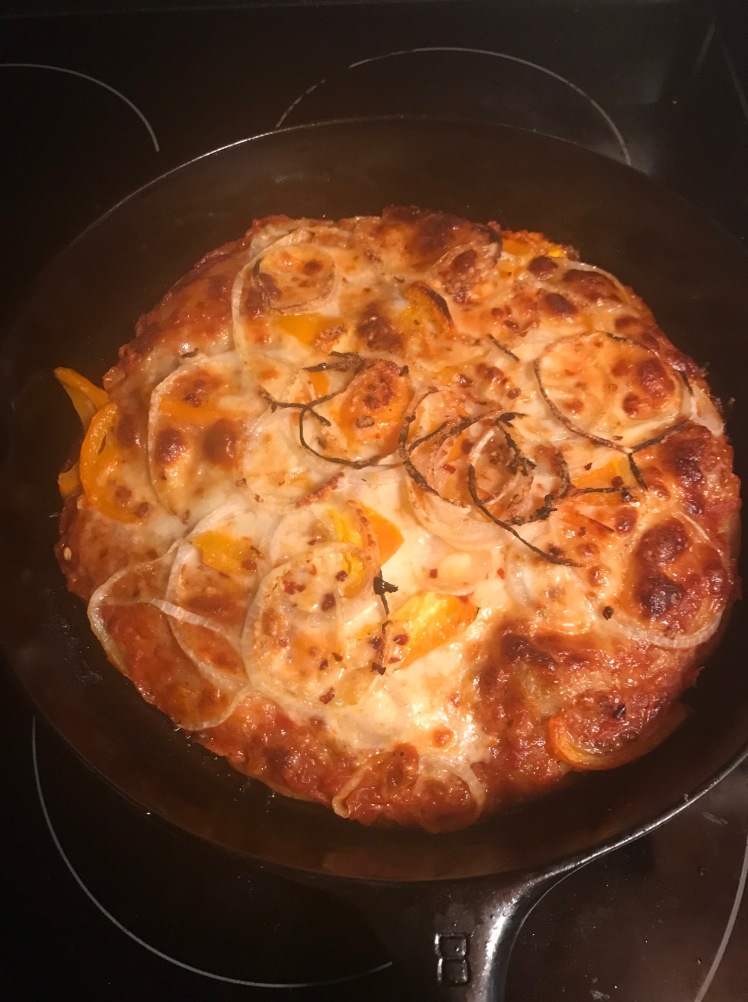 Cheese is less terrible to the environment than beef itself, but it’s still pretty bad.  However, for this challenge, I wanted something that featured dough, because….really, dough is pretty magical.  The recipe for pizza crust I use requires only bread, salt, yeast, water, and oil.  That all seems rather insubstantial, but it turns into this beautiful thing… 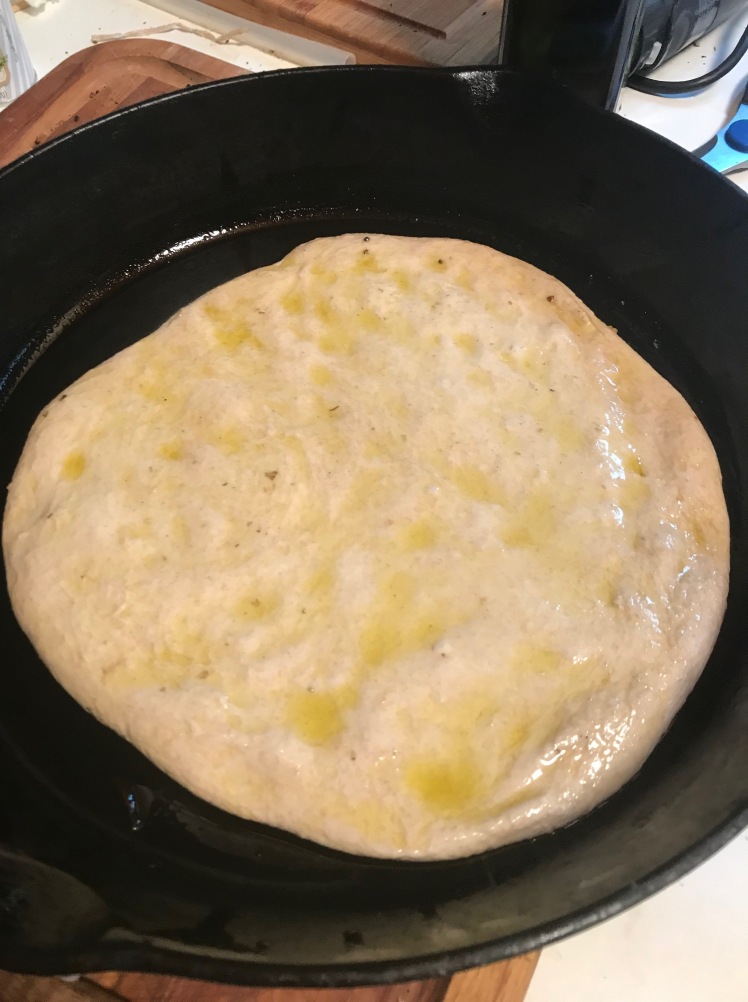 Normally I make my own sauce, but fresh tomatoes were too pricy, so I went with a jar from the grocery store.  I topped that with cheese, and then thick layers of my few precious fresh vegetables–onions, garlic, and orange bell papers. 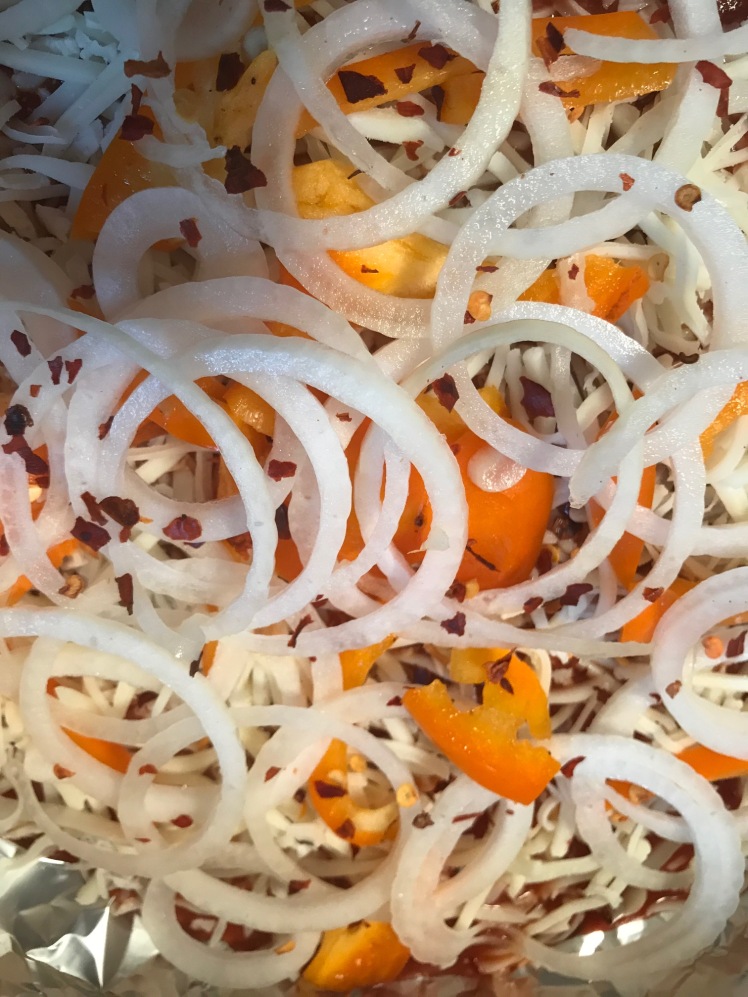 None of these bits of chopped vegetables dotting the pizza for me.  Vegetable coverage was major!

Cooked in a cast iron skillet, and served with salad and vinaigrette dressing, just two pieces were enough to fill everyone up, even my son.  So while it is not the healthiest or most Earth-friendly meal, it is something that I serve only once a month (if that often) and made a low-budget dinner that we enjoyed on this special Meatless Monday.

NOTE:  Let me make clear that I love Cory Booker.  I really appreciate his attempt to experience what life is like for his less-fortunate constituents.  He chose to live in project housing when he was Mayor of Newark, and still has a home in what is considered to be a low-income neighborhood of that city.  I’m just saying don’t follow his model in planning your SNAP Challenge meals.